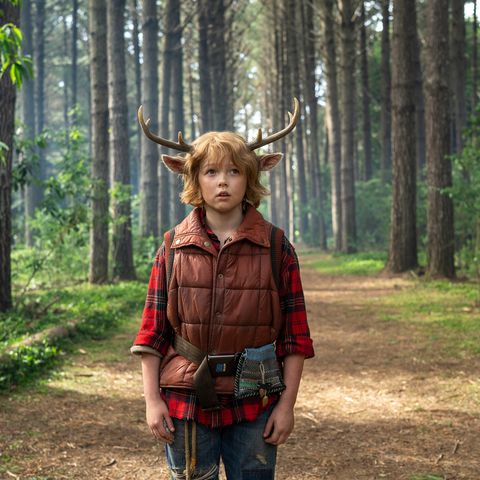 Sometimes it’s okay to bend the truth if it helps someone you love. This line, from Netflix’s new series Sweet Tooth (based on Jeff Lemire’s apocalyptic 2009 comics series of the same name, sounds like something out of a Pixar classic like Finding Nemo. When you have a story about a world-ending virus on your hands, adopting this sort of tonality is an interesting choice — there’s any number of ways in which the adaptation can go wrong. Luckily for Sweet Tooth, its fast-paced plot and amiable leads hook viewers in early and scarcely put a foot wrong thereon. Much of the action here is predictable, to an extent, and the dramatic and/or ultra-violent notes are muted. Nevertheless, Sweet Tooth is a solid, well-crafted, superbly edited piece of ‘prestige TV’ that could easily become an enduring franchise for Netflix. 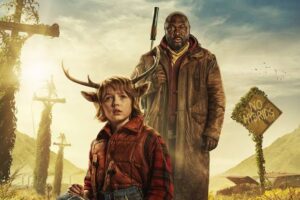 The story begins a decade before the show’s present: a deadly virus brings about “The Great Crumble”, as countries across the planet start to be wiped out. At around the same time, man-animal ‘hybrid’ babies begin to be born to women everywhere. Nobody knows whether these hybrids are the cause of the virus or merely another symptom — and so, hybrids are hunted relentlessly. The protagonist is an unusually gentle young deer-boy called Gus (Christian Convery), who sets off on a road trip across the remnants of America, in search of his mother. His protector is a physically imposing loner called Jepperd (Nonso Anozie, who played villain Xharo Xhoan Daxos in the second season of Game of Thrones) who has some answers of his own to dig up. Along the way, they meet other hybrids as well as bloodthirsty hunters, eccentric scientists, and so on.

This is a classic innocent child/lethal weapon pairing, a la the film Leon the Professional or the Lone Wolf and Cub manga series. There are certain obvious advantages to this structure, from a screenwriter’s POV: the child softens the grown-up lethal weapon’s sharp edges, makes them less abrasive and a little more nurturing. In turn, the lethal grown-up toughens up the child, contributes to their coming-of-age in small and big ways. Generally, by the end of the story, the child is much savvier while the grown-up learns how to be a little less cynical and a little more grateful for the gift of life. It just…works. 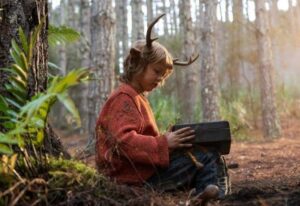 Christian Convery’s performance as Gus (who is nicknamed ‘sweet tooth’ because of his fondness for candy) is at the heart of Sweet Tooth’s likeability. Like Yoda in the original Star Wars trilogy was controlled by puppeteer Frank Oz, Gus’s deer ears are practical effects (and not VFX), courtesy of a puppeteer. His lines are designed to tug at your heartstrings non-stop; there’s little of the rebellion sometimes associated with runaway children in fiction. Convery makes up for this conservatism by throwing himself into the ‘wide-eyed’ role he plays. The camera loves him and he shows visible growth as an actor throughout the eight episodes. Anozie is reliably excellent as Jepperd, especially towards the home stretch as his character’s back story is gradually teased out and we understand his motivations a little better. Among the supporting cast, Will Forte as Gus’s father (who he calls ‘Pubba’) and Dania Ramirez as Aimee Eden are the standouts.

There is a cost to all this wholesomeness, however: fans of Jeff Lemire’s original comics may find themselves a bit underwhelmed with the PG-13-ness of it all. Lemire’s story, while not exactly ultra-violent, was a much grimmer story than this, where the protectors weren’t protectors, the scientists were sometimes butchers and the hybrids were subjected to all kinds of stomach-turning violence. There are moral grey areas in practically every chapter (the series’ original run consisted of 40 issues), not to mention a central divergence — Gus’s mother was definitely dead, to begin with, and so his quest wasn’t motivated by the straightforward desire to meet her, which made it much less simplistic.

SPIRAL REVIEW: EVEN CHRIS ROCK COULDNT SPICE IT UP; NOTHING NEW AND FRESH