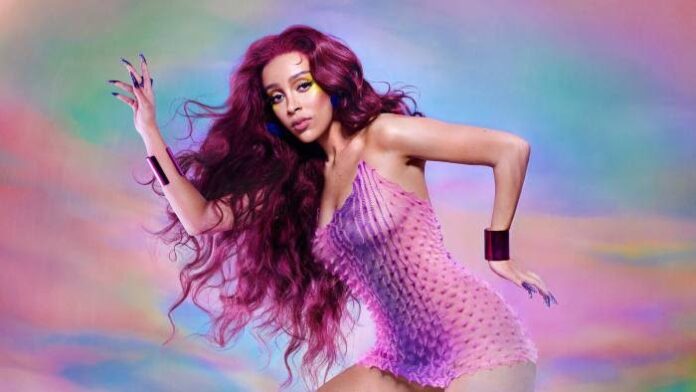 Doja Cat is a three-dimensional threat: a pop star, an edgelord, and a fantasy. On the surface, she matches an e-girl making fart jokes who’d peak at 70,000 Twitter followers more than a masterful, total-package artist. Or the intensely hermetic version of that: a popular, anonymous forum shitposter everyone assumes is a man because the assumption is women—Black women, especially—mobilize against offense instead of causing it.

On June 11, Doja released the second single, “Need to Know,” from her third studio album, Planet Her. It’s one of three tracks from the album produced by hitmaker Dr. Luke (and they’re not the best ones, the Y2k produced ones are). Dr. Luke is better known these days for his legal battle with Kesha regarding allegations of assault. Like many women, Doja Cat had a working relationship with a man before the whole story came to light, which, in our modern world, isn’t that scandalous. She is just doing work.

Planet Her is a kaleidoscope of pop versatility that benefits greatly from a market that currently values eclecticism. It feels both premeditated and casual, well-crafted yet trenchantly frivolous. All of Doja’s music—from her early SoundCloud offerings to 2019’s Hot Pink is perfunctory and unpretentious. Whether it’s her lackadaisical enunciation or carefree lyrical quips, she doesn’t need to recapitulate retro aesthetics as a gimmick Miley Cyrus and Dua Lipa), eschew long-term replay value in favor of chasing TikTok hits, or attempt to out-diva her peers by misguidedly channeling her efforts into sentimental ballads nobody wants to hear.

From the introductory guitar chords and anguished operatic background vocals of “Alone” to the 808s of “Options,” Doja Cat skates on Planet Her’s impeccable production. But her candy-sweet melodies are the star, whether it’s the crystalline falsetto in “Love to Dream” or the way her voice flutes up to a “woohoo” in the chorus of “I Don’t Do Drugs.” In “You Right,” the longing and yearning in her restrained pre-chorus segues effortlessly into a resigned hook. But Planet Her’s true standouts draw on the same cinematic, life-affirming spirit that propelled Hot Pink’s “Bottom Bitch”: The harpsichord-assisted digicore of “Payday,” ft. Young Thug; the uniquely Black girl celebration of life contained in “Get Into It (Yuh)” as it encapsulates the two seconds that preempt twerking—the pre-leg kick—while Doja rattles off the prerequisites to “get into it.” (“And if she ain’t she got a butt, fuck it, get into it, yuh.”) 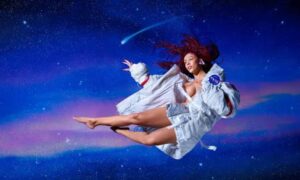 Even “Kiss Me More,” which shares attributes with other songs you might hear while perusing Forever 21, is too inspired to be just that. It’s more immediate than the kind of charmless session throw away that has to be aggressively top-lined into something listenable. SZA’s breathlessly idiosyncratic verse distinguishes it further: “All your niggas say that you lost without me/All my bitches feel like I dodged the county/Fuckin’ with you feel like jail, nigga/I can’t even exhale, nigga.”

But while SZA’s words ripple with angst, Doja Cat but are unconcerned. She exceeds the mark without ever appearing like she’s trying. She’s an underachieving overachiever, singing the lines to “Imagine” (“Imagine, imagine, put the studio in the mansion”) like she took a muscle relaxant. Her attitude feels perfectly calibrated for a burnout generation. Some artists release albums that function as grand gestures, but Doja Cat doesn’t have to; Planet Her is an enormous shrug, the edgelord hottie pop star telling the world that it’s not her job to care.