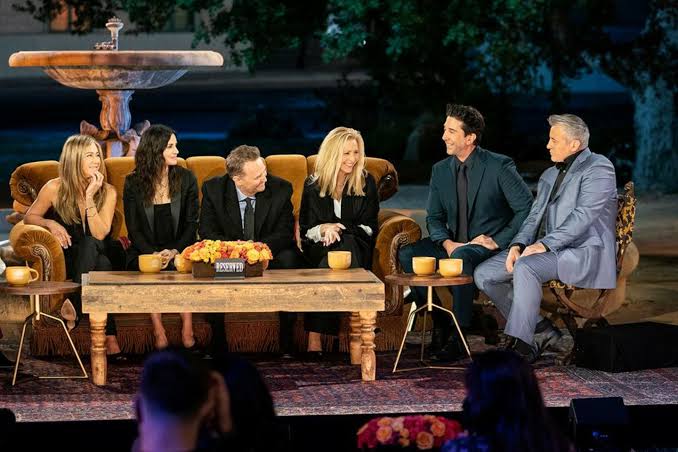 Finally, we witnessed FRIENDS Reunion, with tears in eyes. The episode began with the six cast members just walking onto the set and reliving the moments they spent in those 10 years while shooting the great series.

There it was: the bonding, the recollections, the funny revelations, the search for the lost years of friendships. And making their millions of fans feel that the show always meant the world to them the way it is to their fans. 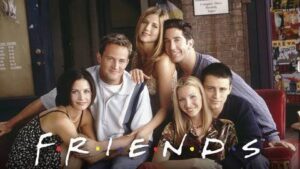 The episode kept shuffling between the six cast members: David Schwimmer, Lisa Kudrow, Matthew Perry, Courteney Cox, Jennifer Aniston, and Matt LeBlanc revisiting their moments. The host was James Cordon on that big orange couch in front of the signature fountain. All of the ‘friends‘ just glanced like this solid group of people who were just together in the entire nature of their real friendship even though they were far away from each other. And didn’t meet each other in many years. Maybe didn’t get the chance to talk so much.

At one point, Matthew summed everything up by saying that they may not be meeting each other very frequently. But if they bump into each other at a party, they were going to vacate the event right away to stay with each other for the rest of the evening. He confessed their bonding was such that the other people at the party would appreciate them excusing themselves because that’s how close they were – not physically connected, but nearly always there.

The highlight of the show was the stars sharing their memories like LeBlanc revealing how Courteney was freaking at him when he removed the lines she wrote on the table in the kitchen below the fruit ball. While David disclosed that Matt had dislocated his shoulder while performing the famous scene in which he competes with Chandler to grab the couch in Monica’s apartment.

When the host inquired the stars if there was any romantic off-screen chemistry, Jennifer looked at David and he uncovered that they were sort of ‘crushing hard’ on each other in season one. The producers even cut to show various rare footage from the sets where both of them were seen flirting and sharing cuddles.

Lisa executed her iconic song Smelly Cat where Lady Gaga joined her. Gaga joining Phoebe seemed a little over the ceiling. Though it was offset with how the pop singer complimented Lisa for her character that gave hope and motivated many youngsters by normalizing ‘being distinct’.

The creators of the show – Marta Kauffman and David Crane – often kept talking about how they saw their characters in the actors that they cast. It was disclosed that Courteney was being considered for the role of Rachel. However, she preferred being Monica, and how Matt was as entertaining and incredible as Joey in real life. Jennifer and Matthew were both busy with other TV shows that had gone on-air already. However, the creators took their chances with them and delivered their parts. David, who played Ross, had quit the TV industry and it took both Kauffman and Crane a great deal to convince him to accept the role. 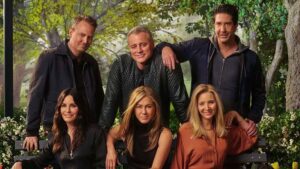 Friends reunion was more than the six stars telling their journey and taking us back to those 10 years. It was more about being on a special voyage with their fans.  Giving them what they have been waiting for and saying to them they are “there for” them and for each other.

The episode concluded by showing how everyone – right from the cast members to the girl giving her last flap on the sets and the creators – all cried when it ended. They were saying goodbye to 10 years of friendship and bonding, and it wasn’t any less than what we felt when Chandler said ‘where’ as the last dialogue of Friends.

No, it couldn’t have been any better!