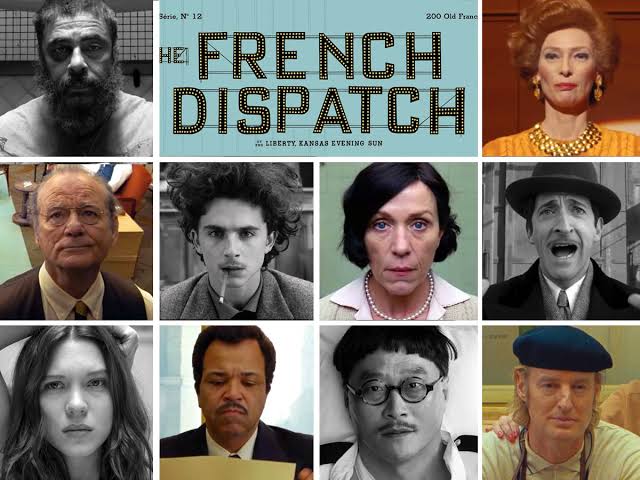 No one is more spoofed than Wes Anderson: his savant mannerisms, sonorous voiceovers, and detailed rectilinear compositions are now so familiar that certain quarters of YouTube have become overrun with Anderson pasticheurs, like Elvis impersonators in Vegas. And with this over-familiarity has come a bit of a backlash – a feeling that Wes Anderson is a tiresome undergraduate taste. 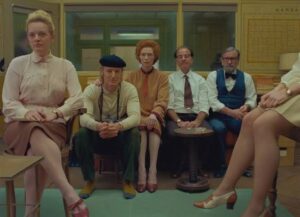 His new film, The French Dispatch, long-delayed by Covid, has on the strength of the extensively picked-apart trailer, been condemned as more of the same. To which I can only say- sure, yes, more fun, more buoyancy, more elegance, more marvelously eccentric invention, more originality. It might not be at the very zenith of what he can achieve but for sheer moment-by-moment pleasure, and laughs, this is a treat.

The French Dispatch is a riff on and tribute to the New Yorker magazine, with its legendary roster of writers, famed insistence on standards, collegiate office culture, distinctive cartoons, and typographic layout, metropolitan sophistication targeted at a general American readership I wonder why we haven’t noticed the New Yorker as an Anderson influence before now.

The French Dispatch itself is supposed to be a special feuilleton-type supplement in a fictional Kansas newspaper, a guide to the intellectual life of France produced in the magazine’s late 60s heyday by a gallery of brilliant American expatriates in the imagined provincial French town of Ennui-Sur-Blasé – although that name is the one moment where the comedy gets a little too broad.

The movie is a kind of short story anthology, taking place in a postmodern Clochemerle, based on the long-read reportage performances of its superstar writers, who almost all have some personal, and indeed sexual, involvement with what is going on, quite against dull ideas about journalistic neutrality.

The proprietor and editor are the diffident, avuncular yet authoritative Arthur Howitzer Jr, played by Bill Murray, a figure based on Harold Ross – but also, perhaps, the late Robert B Silvers of the New York Review of Books.

Tilda Swinton is an art critic JKL Berendsen, who tells the story of the convicted murderer Moses Rosenthaler (Benicio Del Toro) for whom prison guard Simone (Léa Seydoux) acts as nude model and muse. Frances McDormand is Lucinda Krementz, a writer who does a deep-dive into Ennui-Sur-Blasé’s roiling student revolutionary scene and winds up having an affair with its Che-ish young leader Zeffirelli (Timothée Chalamet).

And Jeffrey Wright gives a wonderfully poised performance as food writer Roebuck Wright – like James Baldwin, a gay man of color – who recounts in a television interview (a framing device accorded to no one else) his attempt to interview the special police chief Lieutenant Nescafier (Stephen Park), whose job is to provide special food for fewer flics, and Roebuck’s subsequent eyewitness account of the kidnapping of the son of the commissaire (Mathieu Amalric). And, of course, the repertory cast includes many other big names in a cameo. 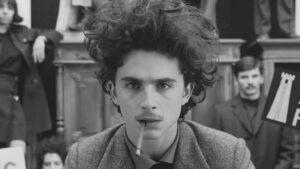 Mr. Howitzer can be a stern taskmaster – he fires a copy boy simply for presuming to tell him the print deadline is approaching – but he has only two maxims: no crying and try to make it seem you wrote it that way on purpose. Maybe those are Anderson’s watchwords as well – unsentimentality and deliberation. But in fact, there is a strange wash of melancholy by the closing credits, as magazine closes and we are semi-seriously invited to feel sad at the end of a non-existent publication.

There is certainly much enjoyment to be found in Anderson’s amazing visuals.