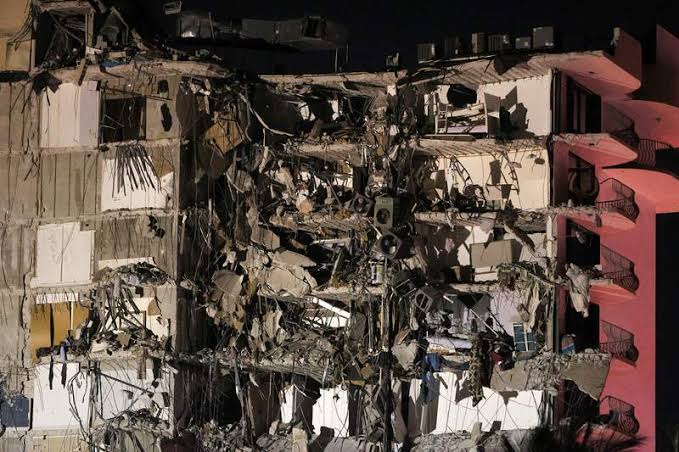 Part of a 12-story residential building collapsed early Thursday in Miami, killing at least one person, a mayor said, and sparking an intense search and rescue effort.

Two people have been pulled from the rubble at Champlain Towers South, and 35 others have been evacuated from standing portions of the building since the collapse happened in the darkness around 1:30 a.m., Miami-Dade Fire Rescue Assistant Chief Ray Jadallah said.
About 55 of the building’s 136 units collapsed, Jadallah said, leaving huge piles of rubble below and materials dangling from the structure that remained in the beachfront community a few miles north of Miami Beach.
One person has died, Surfside Mayor Charles W. Burkett told reporters hours before Jadallah spoke.
“A massive search and rescue are underway, and we know we are going to do everything we can to identify and rescue those who have been trapped in the rubble,” Miami-Dade County Mayor Daniella Levine Cava said Thursday morning.
Rescuers helped a boy from the debris alive, a witness said, and video showed responders helping others leave the standing portions of the building, sometimes using a bucket atop a fire truck’s ladder. Jadallah did not speak about the conditions of the two people he said were pulled from the rubble.

Kimberly Morales told CNN she lives in a building across the street from the collapse and was awakened by alarms going off and pounding on her door.

“I woke everyone up in the room because when I looked out the window, I saw everyone outside. I told everyone to hurry up and leave the building.”

Morales said she didn’t hear the collapse but when she went outside, she saw a significant portion of the building was missing. She’s now in a community center with other evacuees, she said.

Florida Gov. Ron DeSantis said officials are hoping for additional rescues, but “we are bracing for some bad news, just given the destruction we’re seeing.”

Besides two people being taken to hospitals, 10 were assessed and treated at the scene, Jadallah said.

The building was undergoing roof work, but it’s unknown whether this was a factor in the collapse, Burkett said.

Witness finds the trapped boy and gets rescuers to him 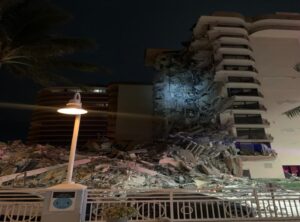 Witness Nicholas Balboa told CNN he saw a boy’s wriggling fingers sticking out of the debris shortly after the collapse — a discovery that led to the child’s rescue.

Balboa, who lives nearby, said he was walking his dog around 1:30 or 1:40 a.m. when he felt the ground shake and saw plumes of dust and debris. He and another man went to the back of the building. Just as he was doubting anyone could survive the collapse, he heard someone screaming, he said.

Finally, I got close enough to hear him, and (the trapped boy) said, ‘Can you see my hand?'” Balboa told CNN’s “New Day.”

“He was sticking his hand up … through the debris. And I could see his hand and his fingers wiggling.”

Balboa and the other man got a police officer to come over, and other rescuers eventually arrived, Balboa said.

The boy, who was under a mattress and bed frame when he was found, was pulled out, he said. 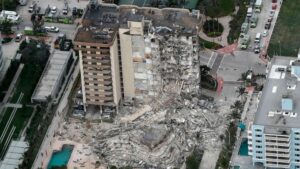 A rescuer reached an arm under what looked like a collapsed wall, its reinforcing metal bars now pointing skyward, to help the survivor, who was wearing a dark shirt and pajama pants.

The survivor slowly leaned over, laying their body over a rescuer’s right shoulder and draping their legs over the bigger person’s chest, the video shows. Then, the survivor was lowered onto a white stretcher and helped the rescue team secure orange straps. The team carried the person away.

Levine Cava, the Miami-Dade County Mayor, said a family reunification hotline has been set up for people trying to get information about their loved ones who may have been in the building: 305-614-1819.